To provide a window for foreign residents to present their ideas to improve inconveniences experienced in daily life, reflect on those ideas and promote satisfactory living conditions.

My notes from 2013: “Run by the Seoul City Government, this program has been going on for around two years, though this last year has not seemed that successful. I hope that the government is reorganizing how it is being run as there is a lot of potential here. The other monitors that I’ve met have been full ideas and energy but have become frustrated because of a lack of direction and feedback. Let’s hope things improve.”

From Summer 2014:  “Now I am team leader of one team. I’m not sure what the team is called. Originally we were called the English Team, but no one speaks English during meetings and most correspondence is in Korean, so technically we aren’t the English team. Now we call ourselves the Multinational Team. So far, we’ve submitted two team reports, one on garbage disposal problems and the other on Police services and Emergency services (including 112 and 119 emergency numbers). The other team is the Chinese team. At the next meeting for all members, we hope to make another team as well. Overall, the program has improved a lot due to a new city official in charge. She’s a she, Chinese, and not too old. Thank you new official!” 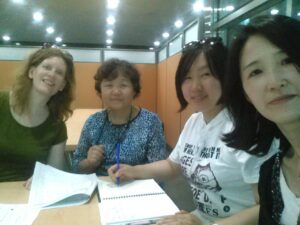 Here is a sample of my work done as an advisor to the Seoul City Government. I prepared short reports recommending changes that would improve the lives of international residents of Seoul. This is done as part of the Seoul Global Center.

Misleading promotions of Insa-dong on websites